Profoundly positive scientific answers are emerging:
Every effort has been made to enlist the greatest minds in the art world to help prove the origins of this collection. Research methods are emerging that will help confirm, beyond a reasonable doubt, that Jackson Pollock painted all the pieces in this amazing body of work. Examinations have been initiated in the fields of pattern recognition and fractal analysis, materials analysis, and DNA and fingerprint recovery and determination. Preliminary results are very positive and are consistently yielding information that gives encouragement to all those working to advance this project.

Pattern Recognition and Fractal Analysis:
To implement and apply the leading edge of science in pattern recognition and fractal analysis, Professor Richard Taylor of the University of Oregon was asked in 2003 to perform his proprietary fractal analysis on a group of paintings from Pollock’s Paradigm. His research demonstrated that they were “composed of the specific form of fractals found in Pollock’s poured paintings.” These were the first pieces ever tested by Taylor and his associates that had been found to be an exact match to the known Pollock patterns, other than already authenticated works of Jackson Pollock. Richard Taylor’s research is still ongoing with more than 30 paintings analyzed to date.

The presence of a specific match on numerous canvas pieces and a number of paintings on paper and artboard, all of which are part of The Nemeth Collection / Pollock’s Paradigm, must certainly constitute a unique and convincing validation.(See discussion of this on the Azusa Pacific exhibition page here)

C1 is referenced in Richard Taylor’s analysis as Revelation I

The legendary mathematician and father of fractal geometry, Dr. Benoit Mandelbrot, has come out in support of Taylor’s research and has confirmed that Pollock’s paintings are indeed fractal in nature.

Material analysis of paintings from Nemeth Collection / Pollock’s Paradigm Collection have been conducted and date from at least 1998. These studies support the authenticity of the collection. Some of the results are here on the Materials Analysis page.

Forensic Analysis: DNA and Fingerprint Evidence:
A number of the paintings in the Pollock’s Paradigm collection have been found to have hair and fiber embedded in the painted surface. Some of the hairs appear to be of human origin and could be used in comparing DNA with DNA retrieved in a study conducted at the University of London. That ongoing London project centered on human hair samples retrieved from paintings on which fingerprints were identified to match fingerprints found on objects preserved at the Pollock studio. So far it has produced some results indicating that two of the paintings that have matching fingerprints on them are also linked by DNA. Although the reference sample that was from the Pollock studio embedded in the paint on the floor has not been processed yet, these samples could serve to test if a match may exist between hair samples from Pollock’s Paradigm and others analyzed so far. 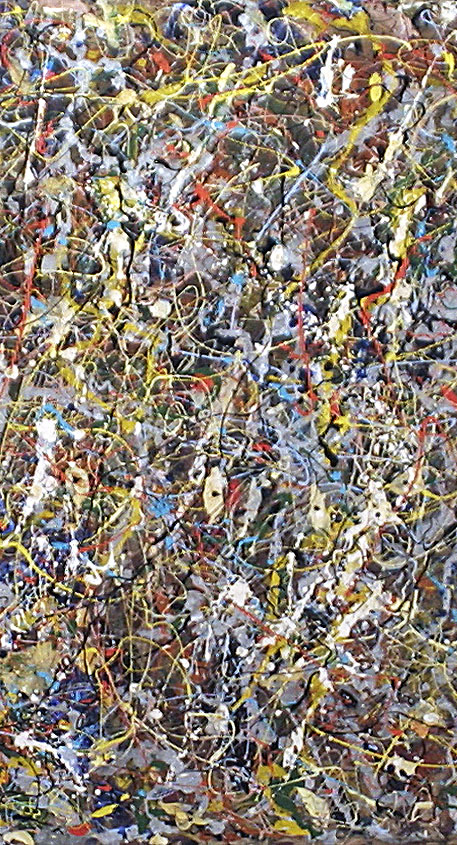 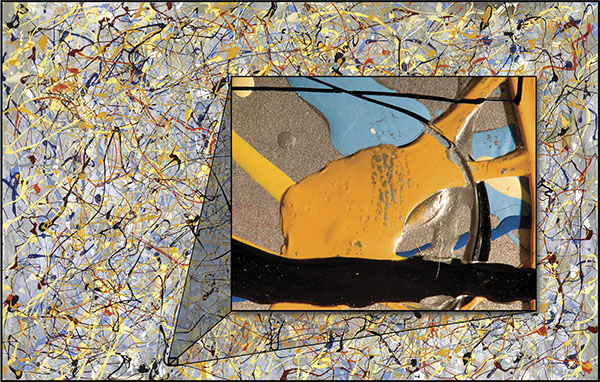 Location of fingerprint sample on L1 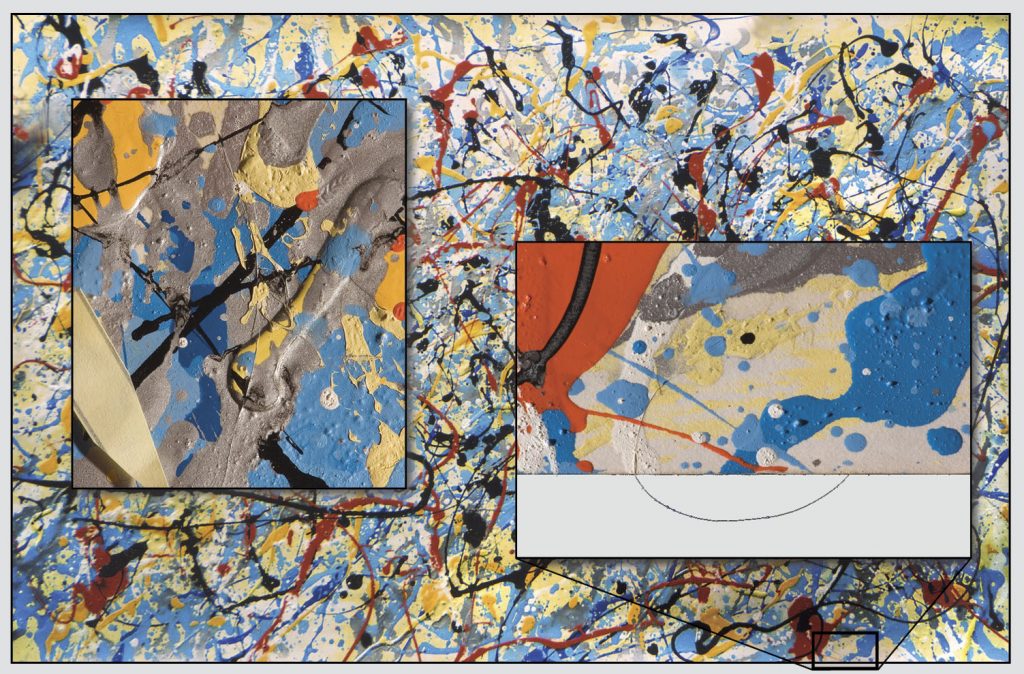 Hair embedded in paint and at edge of E5